Malaysia has a minimum purchase requirement is RM1 Million (about US$225,000 as of early 2017). But in the State of Selangor it’s RM2 Million and foreigners may only purchase landed properties if they’re in gated communities.

This price was raised several times before with the latest update back in 2014.

In addition, foreign buyers may not own land designated as “Bumiputra only” – Bumiputra meaning ethnic, Muslim Malays. They also cannot own most agricultural land or properties designated as low or medium cost housing by the state authority.

Foreigners buying property in Malaysia are subject to a minimum purchase price which varies depending on the state, location, and type of real estate.

Every state has a different minimum requirement while some states raise the price based on whether you’re buying a condo or landed property.

Not only that, but some states have different rules depending on whether you’re taking part in the MM2H (Malaysia My Second Home Visa) program.

Below is a chart showing the minimum purchase requirements for foreigners in each Malaysian state. 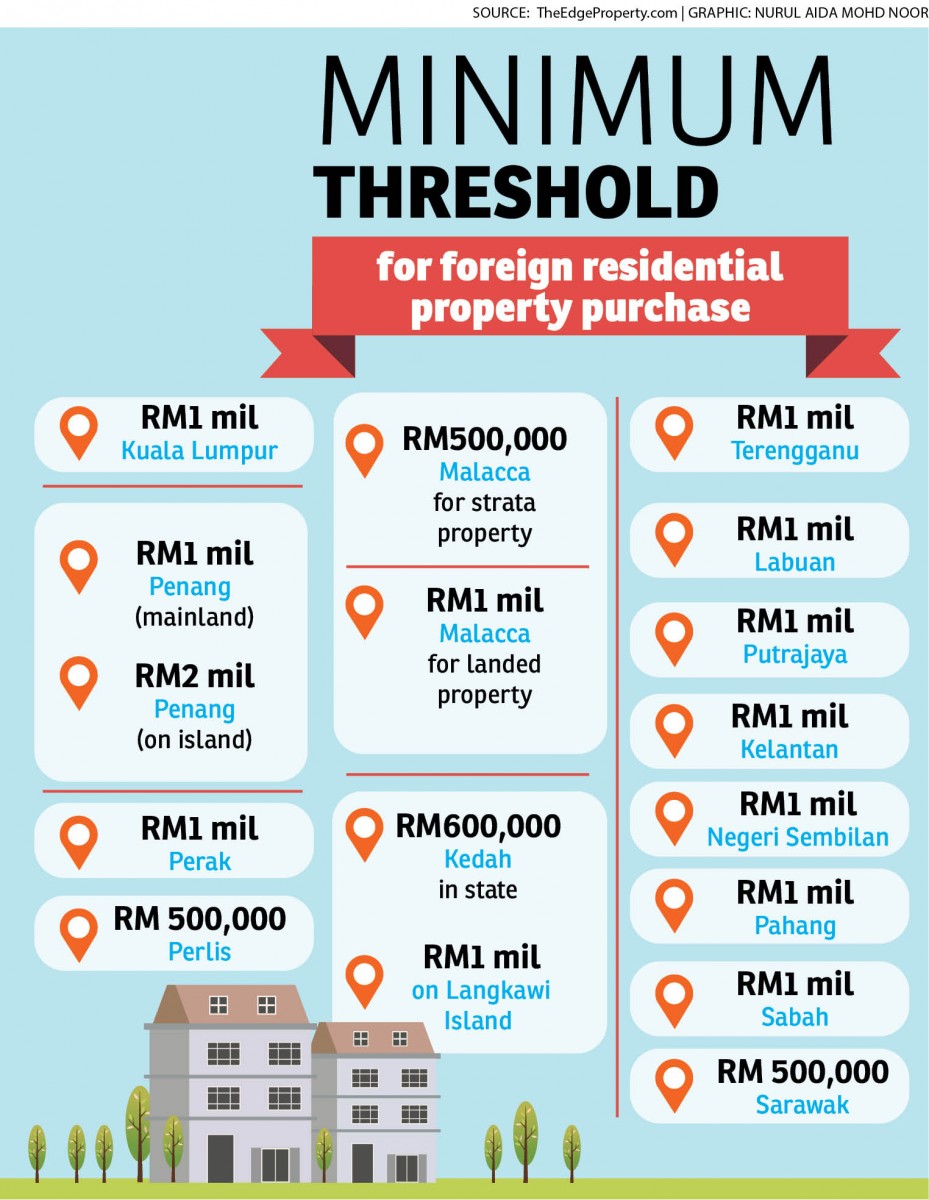 How Much Are Property Taxes in Malaysia?

High taxes are one weak point of investing in Malaysia property. Rental income tax here is a flat 20% rate for residents. This is obviously very high and taxes are even higher at 25% if you’re a non-resident in Malaysia.

Real Property Gains Tax (RPGT), paid on any profit made when selling property, is also very high if you’ve held a property for less than half a decade.

Preventing speculation among short term buyers is the stated goal of Malaysia’s RPGT. Most countries in the region assess a similar tax except Cambodia.

Furthermore, you must pay an annual “quit rent” tax which is usually less than 100 Ringgit (US$25).

If you’re purchasing a condo unit or belong to a landed community, they’ll likely have an annual maintenance fee as well. These vary widely based on location, facilities, density and standards but generally hover around RM4 (US$1) per square foot.

Malaysia has one of Southeast Asia’s most well-documented and secure titling systems. This is the case for both land and condominium units, so you’re unlikely to have any problems from the government.

Therefore, any problems or things to look out for – as is the case in almost every property market in the world – would be those coming from the development company or builder.

If you’re purchasing from any reputable company you shouldn’t have any problems though.

New homes and condo units always come with a warranty. The developer is required to honor warranties and build the project to the specifications in the purchase agreement.

There are about twelve publicly listed developers. Being listed on the country’s stock exchange, the Bursa Malaysia, is usually a good sign that a firm has a strong reputation.

Being listed means a company meet certain financial standards, capitalization requirements, and are accountable to their shareholders. They aren’t going to just run out of money halfway through the project.

Malaysia is one of Asia’s smaller countries with a population of just around 30 million people. But the mere fact that foreigners are able to own land opens up just every Malaysian town and city for investment. That means you’ll have tons of options.

Compare this to, for example, Thailand which has a larger population but where foreigners may only own condominium units. You probably won’t find many condo projects in Chiang Rai or Nakhon Nayok.

Most things of any business or political importance go through Kuala Lumpur. However, plenty of midsize cities such as Penang, Kota Kinabalu, Johor Bahru, and Kuching and popular among locals, expats, and retirees alike.

Kuala Lumpur is one of Asia’s most diverse and international cities.

Beside KL city area, all three of these suburbs have several things in common, even though they’re distinct areas. Damansara, Bangsar, and Mont Kiara are all in the west suburbs of Kuala Lumpur about a 15 minute drive away from the city center. /

They’re all nonetheless very popular with expats because of their affluence, western amenities, good international schools, diversity of restaurants, and low crime rate.

Prices are also noticeably lower per square meter in these areas than in the city center. All of these things together especially make Mont Kiara, Damansara, and Bangsar attractive for expat families.

Base Rate vs BLR in Malaysia: How does BR work?

Why Owner need an Exclusive Agent?

Covid-19: Two + One developments in Mont’Kiara with positive cases

After 4 times Overnight Policy Rate (OPR) Cuts in 2020, this is what happens in property market now

If you are property investor what is your next move?